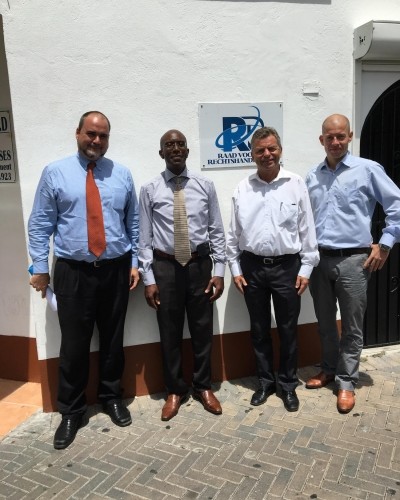 PHILIPSBURG:— The newly appointed Dutch representative in Philipsburg, Mr. Chris Johnson, on Monday (June 6) paid a visit to the offices of the Council on Law Enforcement in St. Maarten. Joining the Dutch representative was his predecessor, Gert Versluis.
Mr. Johnson was briefed on the ongoing activities of the council by its chairman Franklyn Richards and Gerard van Voorst, chief inspector with the Council on Law Enforcement in St. Maarten.
The Law Enforcement Council is a legal entity in which Curaçao, Sint Maarten and Netherlands (insofar as it concerns the BES-islands) are represented. The Council is based on the Kingdom Act of the July 7, 2010, known as the Kingdom Act on the Law Enforcement Council.The Council is charged, among others, with the general inspection of the organizations of the judicial chain – with the exception of the common Court of Justice – in Curaçao, Sint Maarten, Bonaire, Sint Eustatius and Saba. The Council thereby looks at the effectiveness, the quality of the performance of duties as well as management of those respective organizations.
Ever since its establishment, the council has conducted numerous studies resulting in many recommendations being made by the council. Those recommendations are contained in reports submitted to the minister of justice.
In addition, the Council is entrusted with the general inspection of the quality and effectiveness of judicial cooperation between the countries of the Dutch kingdom.
The Council has a secretariat with branches in Curaçao, Sint Maarten and Bonaire (for the BES- islands).